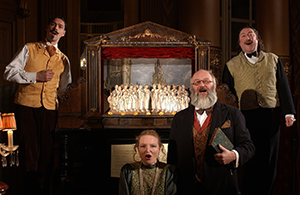 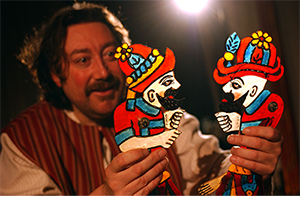 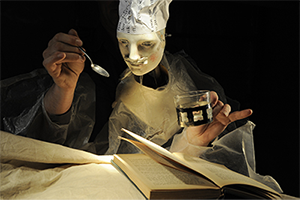 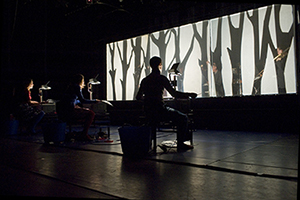 …  was founded under the name Marionettentheater Taptoe by Luk De Bruyker in 1968. Five years later, the author Freek Neirynck joined the company and became its artistic director for the next 25 years. Between them, De Bruyker (as stage designer and figure performer) and Neirynck (as author and dramaturge) built up the company into an ensemble of considerable renown both at home and abroad.

Theater Taptoe was three times awarded the title of Cultural Ambassador of Flanders and toured from Mexico to Japan. Their most trendsetting productions included Thomas sits dreaming in the classroom, Heaven! And Genoveva, so Chaste… so Pure…

Even after the departure of Freek Neirynck, the company, now headed by its inspirer Luk De Bruyker and the figure-performer and stage designer Dirk De Strooper, continued to score well on the international scene with such productions as Sjoerd zegt… FOERT ( Fly !).

The company entered into close cooperation with the wind ensemble " I Solisti " and produced more and more musical theatre.

As a result of the suspension of their grant by the Flemish Community (2009), the company’s organisational structure came to an end. The puppets became the property of ‘het Firmament’ (Centre for the Cultural Heritage of the Performing Arts). Luk De Bruyker and Alain Ongenaet (lighting designer & technician) took care of the rest of the legacy under the name TAPTOE’s erf. They together made the emotional farewell production Going, Going, GONE! and a new version of Taptoe’s most international hit, Heaven, based on the oeuvre of the Belgian surrealist painter René Magritte.

TAPTOE’s erf receives an operational grant from Ghent City Council and project grants from the Province of East Flanders.